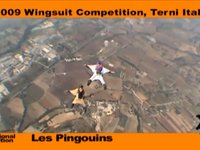 Organised at dropzone The Zoo in Terni, Italy, the 2nd edition of the International Wingsuit Competition was a huge succes.
Wingsuit teams from the USA, France, Netherlands and Italy flew in a competition of 5 rounds. The first 4 rounds consisting of a set of compulsary moves, with the 5th and last round being a free routine.
Points were awarded for the number of docks flown in a round, combined with an artistic score for camera work and flying style.

Dutch wingsuit team ‘FlyLikeBrick’ managed to score 1st Place in the International catagory.
Performers Alejandro Lopez (PF Phantom2) and Jarno Cordia (PF Phantom2) were on fire, and they set the highest score in every single round. They were beautifully caught on tape by their camera flyer Costyn van Dongen (PF Ghost2), who also took home the prize for Best Camera work.

The French ‘Les Pengouins’ showed some incredible flying, and were a close 2nd, scoring slightly better on flying style than their Dutch competitors, but scoring slightly less on docks and camerawork.
The American ‘TonySuits Factory team’ (the winner of the competition back in 2008) also put up a great fight and in the end managed to take home the 3rd prize.

In the National catagory, the Italian team ‘Easy to Fly’ scored 1st, followed on 2nd place by ‘Kristinas Angels’ with ‘Potta Buodiulo e Ponc’ on 3rd. Prizes were generously made available by Phoenix-Fly, SkyJester.de, Turbolenza sports wear
and Italian dropzone The Zoo.

For photos, videos and more information on the event, check wingsuitcompetition.com