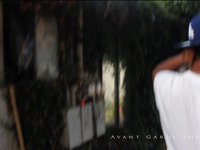 The Kidd FlyBoy, a rapper form Oakland, Ca, who’s spent his recent years in school in Chico, CA and Eugene, OR has quite the internet buzz, but with his first official mixtape Cloud Music: The Prequal finally on it’s way (Dropping sometime in October) there’s finally something to look forward to this fall. Expect one of the best mixtapes of the year. Grab your parachutes.

Expect much more from FlyBoy on the way.
The music playing is FlyBoy’s first single of the mixtape.