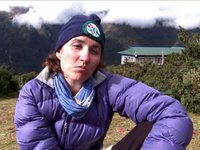 In September 2008, self styled adventurer Nigel Gifford and his company High & Wild sold a dream to the world. He would lead an expedition to Everest where a group of privileged clients would have their names forever mentioned in the record books as they became the first people to make a skydive over the famous mountain.

What followed was three unforgettable weeks of lies, deceit, danger and despair. Skydive Everest was certainly an adventure, just not the one most people had signed up for!!

To celebrate the expedition’s second anniversary, and the recent arrest warrant issued for Nigel Gifford in Nepal, here is a sneak preview of the true story of the first ever ‘Everest Skydive’, certainly an unforgettable experience for all who were there.