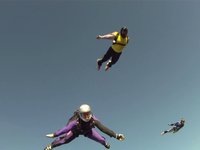 A 2010 Skydive Twin Cities Film Fest Entry from Roger That Productions. I filmed the majority of the footage, but a good portion was collected from others. I could not have made this without the help of my friends who are credited in the video.