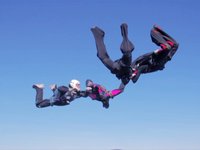 Super slow motion with Twixtor for After Effects. It was shot at 720p 60fps, conformed to 24 fps, then slowed down to 5% in Twixtor, equivalent to 1200 fps. Edited with Final Cut Pro. Handheld ground footage, shot at 1080 24p, smoothened out with FCP Smoothcam filter.

The whole footage consists of just one dive on Superbowl Sunday, 2011.

Outdoor footage looks a little washed out on purpose. I prefer seeing the details from the shadows. The entire footage was shot in “Super Flat” mode, then graded a bit to bring out the color. Contrast was dialed up just a bit, not to blow the highlight and crush the black.