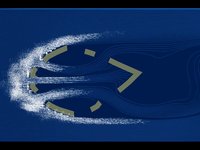 “drawInFluids” allows us to grow a form in a wind climate. While we can make a 2D drawing with CADs’ style, the air behaviours emerged from interactions between objects and winds, such as ventilation performances in architecture, can be evaluated simultaneously. Geometries of forms can be modified, which in turn affects air behaviours around them: a real-time integration of forming with performances in computational design.

Made with Processing.
The fluid solver is based on “Fluid Simulation for Computer Graphics” by Robert Bridson, which utilises semi-Lagrangian method in the advection, and MICCG method for the projection, which gives us fully converged pressure values with an acceptable speed.

Other tests to be followed soon…