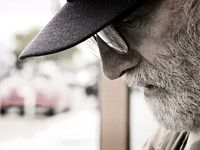 Nearing his eightieth year, Malcolm Lambert has chosen to avoid success for his entire life, while pursuing justice. What one man sees as a life of failure however, truly has been a ‘just’ life…

I filmed and edited this documentary during the summer of 2009, before my senior year in college. It has since won some awards, been to some festivals, and aired on TV!